Ukrainian officials confirmed that the army began the stage of defending the capital, Kyiv, on the second day of the Russian invasion of their country, as clashes took place in the north of the capital, and the Russian forces announced the control of a strategic airfield and the landing of paratroopers in the region. 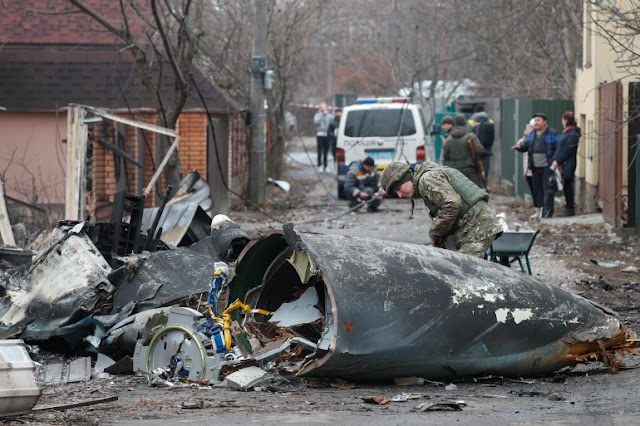 The Russian Defense Ministry said that its forces had taken control of the strategic Gostomel airport, located on the outskirts of the Ukrainian capital, from the northwest. It added that it had dropped paratroopers in the area and isolated Kyiv from the western side.

The Russian Defense Ministry stated that it had killed more than 200 members of the Ukrainian special units during their battles to seize Gostomel airport.

"I once again appeal to the servicemen of the Ukrainian armed forces ... do not allow neo-Nazis and nationalists to use your children, wives, and elders as human shields," Putin told a televised meeting of the Russian Security Council.

"Take control, and it will be easier for us to reach an agreement," he added.

On the other hand, Ukrainian television said that columns of military vehicles entered the capital to defend it.

The mayor of Kyiv Vitali Klitschko said that the Ukrainian capital's defense stage has begun. "There are shooting and explosions in some neighborhoods. The saboteurs have already entered Kyiv. He told a news briefing that the enemy wants to bring the capital to its knees and destroy us," he told a news briefing.

An American official told Al-Jazeera that Russian forces continue to approach the Ukrainian capital from 3 axes, but indicated that their progress towards Kyiv is not as fast as expected.

The official explained that what is happening is still within the first stage of the Russian invasion and that Russian President Vladimir Putin has not used most of his forces.

The US official added that Ukrainian forces are actively using SAMs against Russian warplanes.

In the same context, the British Ministry of Defense said - in a statement on Twitter - that the Russian invasion is making limited progress today, and that Ukraine still controls major cities.

The Apollon region, northwest of the capital, is witnessing heavy artillery bombardment, as Russian forces are trying to impose their control over it.

A Ukrainian security source told Al Jazeera that fierce fighting had taken place in the area and that the residents of Apollon had participated in confronting the advance of Russian armor. The Ukrainian army had deployed its tanks in the area before the arrival of the Russian forces.

For its part, the Ukrainian Defense Ministry said that the losses of Russian forces since the start of the invasion exceeded 1,000 people. The ministry stated that the Ukrainian forces destroyed several ballistic missiles and at least two Russian planes.

"Russia has not suffered such several casualties in any of its armed conflicts," it added in a statement.

The ministry had previously stated on its Facebook page that a special squad of Russian forces was carrying out a sabotage operation in the capital and that the ministry had asked civilians in the Apollon neighborhood to take up arms and report on "enemy movements, making Molotov cocktails and neutralizing the occupier."

On Friday, authorities in the capital advised Apollon residents to stay off the streets as "active hostilities" approached the area, and the city council said in a warning, "As hostilities approach, we ask residents of Apollon to avoid leaving" their homes.

Naval landing of the Russian forces

A senior official in the US Department of Defense (Pentagon) said today that the Russian forces are conducting a naval landing in Mariupol, overlooking the Sea of Azov, southern Ukraine, and are deploying thousands of soldiers there.

The official stated that the Russian forces advancing from the Crimea peninsula - which Russia annexed from Ukraine in 2014 - were divided into two axes towards the cities of Kherson and Mariupol.

The US official indicated that the resistance that the Russians are facing in Ukraine is stronger than they expected and that there are indications that they have lost part of the momentum of their advance, stressing that the Russian forces have not yet controlled any Ukrainian population centers.

But he added that they had only sent to Ukraine a third of the forces that they had mobilized in its vicinity, and he also said that the Russian forces had launched two hundred ballistic and cruise missiles since the start of the invasion.

The same source stated that the Ukrainian Air Force continues to fight and repel Russian fighters, and stressed that Russia has not imposed its superiority over Ukraine's airspace and that the air defense systems are still operating.

The same American source said that the battles are still taking place in Kharkiv (northeastern Ukraine) and that the Russians have not carried out additional airdrops.

In the Donbas region (east), which includes the Donetsk and Lugansk regions, the separatist authorities - which were recognized by Russia before the outbreak of the war - announced that their units had taken control of 3 towns south of Donbas today.

The separatists also said they had captured Ukrainian soldiers in the eastern part of Luhansk with portable missiles.