Russian forces intensified their aerial and ground bombardment on Ukraine, and satellite images showed their progress towards the capital, Kyiv, and while the Ukrainians began organizing popular resistance to stop the Russian advance, US officials commented on the conduct of military operations, which have entered their seventh day. 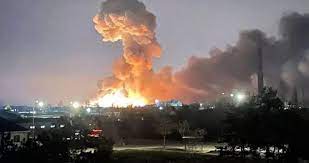 The Ukrainian authorities said that the bombing targeted residential buildings in the Zhytomyr region (west of Kyiv), killing two people and wounding three others.

The broadcast of Ukrainian television was temporarily suspended today, Tuesday, after Russian missiles bombed the main communications tower in Kyiv, while the Ukrainian Interior Ministry admitted that Russian forces had entered the city of Kherson (south of the country).

The Ukrainian Civil Protection Authority said at least 5 people were killed and 5 wounded in the attack.

Kirillo Tymoshenko, deputy director of the presidential office, said that the attack caused a temporary disruption of television and radio transmissions, but that broadcasting operations had resumed, and the tower was still standing.

Ukrainian media broadcast videos showing the targeting of the TV tower, and accused Russian forces of targeting the infrastructure of communications facilities in the Ukrainian capital.

The spokesman for the Russian Defense Ministry, Igor Kanashenkov, announced that these raids are aimed at suppressing media attacks against Russia.

And the "Maxar" website, which specializes in satellite images, published new pictures showing the progress of Russian forces towards the Ukrainian capital, Kyiv.

The pictures showed the movement of a Russian military convoy near Antonov Airport for a length of more than 60 km, and military equipment and units with two or three vehicles moving side by side on the road.

Since the beginning of the Russian war on Ukraine, Antonov Airport has witnessed fierce battles; The attacking forces are seeking to seize this strategic facility in order to facilitate their control of the Ukrainian capital.

The authorities in Kyiv also declared an air alert in the capital, and called on everyone to urgently enter the civil defense shelters.

Kyiv Mayor Vitali Klitschko announced that the army and the city's residents are ready to defend it, stressing that barriers were placed at the entrances to the capital to impede the progress of Russian forces.

Pictures posted by activists on social media showed the moment a Russian plane was shot down near the capital, Kyiv, last Thursday.

In this context, the deputy of the National Security and Defense Council of Ukraine said that the army had eliminated the "Kadyrov group", whose mission was to liquidate Ukrainian President Volodymyr Zelensky.

In Kharkiv (Northern Ukraine), fierce battles broke out on various axes, and a missile landed in front of the district council building. The Russian bombing also targeted power stations.

The Russian bombing of the city of Kharkiv and its suburbs continued for 4 hours.

In Kherson, the mayor of the city said that the Russians were on its outskirts, after advancing from the airport to the Nikolaev highway.

In Sumy, 70 Ukrainian soldiers were killed by a Russian targeting of a military unit, according to separatist reports.

In Donetsk, separatist forces said they would organize two humanitarian corridors for the residents of Mariupol to get out.

A US official told Al Jazeera that there were no indications yet of the Russians' ability to seize Kyiv due to resistance from Ukrainian forces.

"Only a small percentage of the Russian forces are taking part in the battles in Ukraine due to logistical problems.

He explained that "the Russians may not resort to destroying Kyiv because they will need its infrastructure if they control it."

Earlier, a senior official in the US Department of Defense (Pentagon) said that the Russian government had halted its progress in the vicinity of Kyiv, and this may be to regroup its forces.

The US official added that 80% of the Russian combat forces entered Ukraine, but these forces suffer from a lack of logistical support, fuel and food supplies.