The Russian forces entered the second most important city in Ukraine, and announced the siege of two other cities, while some other fighting fronts witnessed relative calm, the day after the Russian Defense Ministry issued orders to all its forces to attack in all directions, while the deputy mayor of Kiev said that the capital witnessed several clashes with subversive groups during the night.

The capital, Kiev, witnessed the night of the firing of machine guns, while the sirens sounded in the city more than once, and some shells hit buildings in the city center near the government complex.

Video of the entry of Russian forces into the city of Kharkiv, eastern Ukraine 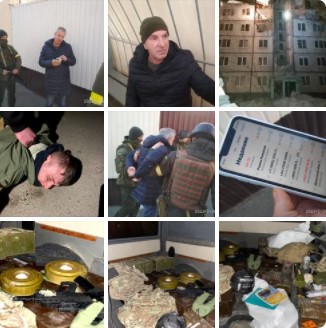 Regarding the course of the battles and efforts to control Kiev and the main cities in the country, Reuters quoted an adviser to the Ukrainian Interior Minister as saying that Russian forces entered the city of Kharkiv, which is the second largest city in Ukraine in terms of area and population, the ancient capital, and the largest industrial, cultural and scientific center in the country. .

The Chairman of the State Administration Council in Kharkiv confirmed that the Russian forces entered the city and are being dealt with, stressing that "there is no truth to the surrender of our soldiers, and we are waging a fierce fight against the Russian forces in the city."

Local governor Ole Sengopov said Ukrainian forces were battling Russian forces in the streets of the northeastern city of Kharkiv on Sunday.

Video clips broadcast on Telegram and the website of the State Department of Special Communications and Information Protection of Ukraine, Anton Hyrashenko, adviser to the Ukrainian Interior Minister, showed several light military vehicles moving along a street and a separately burned tank.

The Reuters news agency quoted the Russian Defense Ministry as saying that its forces are besieging the cities of Kherson and Berdyansk in southern Ukraine.

On Sunday, the RIA news agency quoted the Defense Ministry as saying that Russian forces had "completely encircled" the cities of Kherson and Berdyansk in southern Ukraine and had taken control of the town of Henyshesk and an airport near Kherson.

Regarding attempts to take control of the capital, the Ukrainian army confirmed that the Russian forces "continue their offensive to fortify Kiev" after they "completed the regrouping of their units" on the northern front.

A Reuters reporter said an explosion was heard west of Kiev's city center on Sunday, minutes after sirens sounded.

In the most prominent developments for the fourth day of the Russian war on Ukraine, the mayor of Vasylkiv, southwest of the Ukrainian capital, Kiev, said in a video clip posted on the Internet that the town was exposed to Russian missiles; This led to a fire in an oil facility

The Ukrainian Defense Ministry stated that a Russian missile targeted the oil tanks at the "Kilo" base, which is used to supply tanks with fuel and gas.

Ukraine's State Service for Special Communications and Information Protection also said on Sunday that Russian forces had blown up a natural gas pipeline in the Ukrainian city of Kharkiv.

It was not immediately clear how important the pipeline was and whether the blast could disrupt gas shipments outside the city or the country. Despite the war, Ukraine continues to ship Russian natural gas to Europe.

Al-Jazeera correspondent in Kiev Omar Al-Hajj said that targeting fuel facilities represents a new chapter in the war that has been going on for days between Russia and Ukraine.

In another remarkable development, the Ukrainian Nuclear Energy Monitoring Authority said that a Russian bombardment hit a warehouse for storing nuclear waste in Kiev the moment workers were inside it.

The agency said that the workers at the facility reported the injury to the place from their shelter, in which they took shelter during the bombing, by phone, and that they would not be able to reach it and determine the extent of the actual damage.

In statements to CNN, the two officials added that Russia was suffering "heavy losses" in personnel and aircraft more than expected, in part because Ukraine's air defenses performed better than expected in US intelligence assessments prior to the attack. Russian.

A senior US military official said Russia had not yet achieved an air advantage over Ukraine, as Ukraine's air defense systems and air forces are fighting for control of the airspace.

"Ukrainian air defenses, including aircraft, are still operational and continue to engage and block Russian aircraft," the official added.

An official said that as of Saturday evening, the United States had seen no indication that the Russian army had taken control of any Ukrainian city, even as Russian forces moved to cordon off some population centers, including the capital, Kiev.

One senior US official explained that Russia expected a quick victory, and may have neglected to plan for adequate supplies. An official said the supply lines were a "weak point".