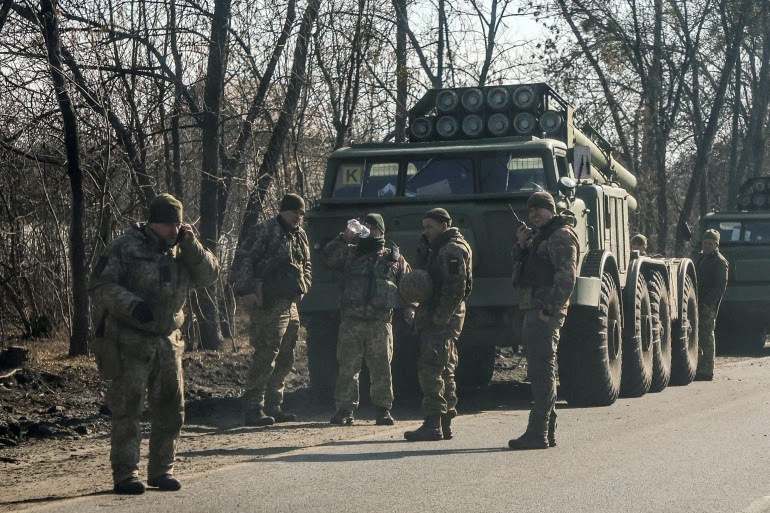 With the end of the first day of battles in all regions of Ukraine after Russia launched a comprehensive military operation against its neighbor at dawn on Thursday, Russian forces took control of a strategic island and the nuclear city of Chernobyl, while the Ukrainian army regained control of Hostomil Airport near the capital, Kyiv.

And the Ukrainian Ministry of Health announced - Thursday evening - that 57 people were killed and 169 others injured, due to the Russian invasion.

Ukraine announced the restoration of control of Hostomil airport in the Kyiv region, hours after the Russian special forces took control of it.

Deputy Head of the Ukrainian Presidential Office Oleksiy Aristovich said that his country's forces have regained control of the airport, after neutralizing the Russian forces present in it.

Aristovich added that 200 soldiers of the Russian special forces were killed in the airport battles.

In the southern axis of the battles, the Ukrainian border guards said that they had lost control of the island of Zmyni, near Odesa, in the south of the country.

In the north, fierce battles erupted in the Ukrainian Sumy region, which is about 60 kilometers from the borders of the Russian province of Kursk.

With the fierceness of the fighting, the Ukrainian army issued an appeal to the citizens of the strategic city of Sumy to confront the Russian attack.

In Kharkiv, which is witnessing fierce battles between Ukrainian defenders, separatist forces, and Russian forces, the city's mayor urged residents to spend the night in the subway and shelters.

Pictures showed large numbers of Ukrainians crowding into the metro of the eastern city of Kharkiv, to escape the battles between the Ukrainian army and separatist forces. Pictures show entire families crammed onto the platform of a subway tunnel.

For his part, Ukrainian President Volodymyr Zelensky said that the most difficult battles faced by the Ukrainian army are on the southern front and that he had issued orders to destroy the Russian paratroopers who had taken control of the Antonov International Cargo Airport.

Objectives of the invasion

The Ukrainian military said Russia was seeking to besiege the Ukrainian capital, Kyiv, open a land corridor to Crimea, and invade Moldova.

"60 tactical battalions of the Russian army have entered our territory," the army added in a statement.

As for Ukrainian Defense Minister Oleksiy Reznikov, confirmed that the Kremlin is preparing for a new wave of attacks and airstrikes on Ukrainian regions.

The Ukrainian minister added that his forces are using samples of modern weapons that his country received from its Western partners.

For his part, the Ukrainian Foreign Minister confirmed that his American counterpart informed him of plans to deliver Kyiv new defensive weapons.

For its part, the US Department of Defense (Pentagon) said that the Russian attack on Ukraine continues from the three main axes in the north, south, and east.

The Pentagon added in a statement that Russia has not fully used its military cyber capabilities, and it is unclear why it has refrained from doing so.

The Pentagon confirmed that Russia launched more than 160 ballistic and cruise missiles at sites in Ukraine.

Reuters quoted a senior Pentagon official as saying that the Russian invasion of Ukraine was the largest conventional war in Europe since World War II.

The US official added that Russia's invasion of Ukraine aims to overthrow the Kyiv government and install a government loyal to it.

For its part, the Ukrainian presidency announced that the Chernobyl nuclear plant is under the control of Russian forces.

While Bloomberg quoted a Western source on Thursday evening, saying that the Russian forces are advancing towards Kyiv through the course of the Dnieper River, explaining that the capital may fall into the hands of the Russians within hours after the Ukrainian air defenses were destroyed.

In turn, Kremlin spokesman Dmitry Peskov confirmed to reporters that Moscow aims to impose a "neutral status" in Ukraine, disarm it and eliminate the "Nazis" he said were present in this country.

As for the Russian Ministry of Defense, it said that all the tasks assigned to the units of the Russian forces on the first day were successfully implemented, the foremost of which is the destruction of the Ukrainian air defense system.

The ministry added in a statement that it had succeeded in disabling 83 ground targets from the military infrastructure of Ukraine, and downed two Ukrainian Su-27 planes, two Su-24 planes, a helicopter, and 4 Bayraktar (TB-2) drones.

The statement confirmed that the forces of the "Republics" of Lugansk and Donetsk (the two separatists recently recognized by Russia) penetrated the defenses of the Ukrainian forces in Donbas and advanced 6-8 km, thanks to the fire support of Russian artillery and aviation.

And high-quality satellite images, taken Thursday morning and published by the specialized company "Mixer", showed much information related to the Russian invasion of Ukraine.

Some of the photos showed damage to the fuel storage areas and infrastructure of the Chuhav airport in eastern Ukraine, and other photos showed the assembly of heavy equipment in western Belarus.

For his part, a senior US defense official said that the United States will send 7,000 troops to Germany, to help reassure NATO allies. These are part of a larger unit that was already put on alert earlier in the year.

The official, who spoke on condition of anonymity, stated that the troops would leave for Germany in the coming days.

The Pentagon said the additional troops moving to Germany could be deployed elsewhere in Europe.

The Pentagon said that Russia launched more than 160 ballistic and cruise missiles at sites in Ukraine.

According to Ukrainian media, the mayor of the city of Kharkiv urged residents to spend the night in the subway and shelters.

The United Nations spoke of the presence of 100,000 displaced people inside Ukraine and confirmed that thousands had left it abroad.