Satellite images showed a 27-kilometer-long Russian military convoy advancing towards the Ukrainian capital, Kyiv, and renewed shelling of the city immediately after negotiations between the two countries’ delegations in Belarus ended, on the fifth day of the war. 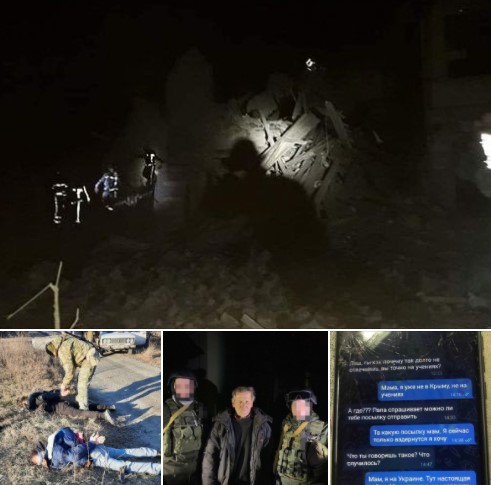 Pictures published by Maxar today revealed the progress of the Russian convoy, which includes hundreds of armored vehicles, tanks and logistical support vehicles.

The Russian bombardment of the Ukrainian capital was renewed this evening, after the ceasefire negotiations between the Russian and Ukrainian delegations in Belarus ended, as Russian media said that the two delegations returned to their capitals to consult before holding a new round.

The bombing was renewed despite the announcement by the Belarusian Foreign Ministry that negotiations between the delegations of Russia and Ukraine "go well", and that another meeting will be held within two days.

And the Ukrainian Army Staff said - in a statement - in conjunction with the negotiations, "The Russian occupiers have slowed the pace of the offensive, but they are still trying to make gains in some areas."

And Ukrainian Defense Minister Alexei Reznikov announced that more than 5,000 Russian forces had been killed and hundreds captured.

"The Russian soldiers have two options, either to die in an unjust war or a blanket amnesty in exchange for surrender," he said.

The Ukrainian Defense Ministry also announced that it is working on establishing a new unit to accommodate foreign fighters who wish to volunteer to fight alongside the Ukrainian forces, after Ukrainian President Volodymyr Zelensky announced on Sunday the force, which he called the "International Legion".

The ministry said it had received "requests from thousands of foreigners to join the resistance to the occupation and protect international security from Putin."

In recent days, the Ukrainian authorities said that advanced units of Russian saboteurs fought inside the capital and repelled them, and Moscow has not yet officially confirmed its launch of an attack on Kyiv.

Meanwhile, Foreign Policy reported that Russia is deploying more reserve forces to Ukraine and resupplying its forces with ammunition and fuel.

Earlier in the day, the Russian army announced that civilians could leave the Ukrainian capital, Kyiv, at the same time accusing the Ukrainian authorities of using them as human shields.

"All civilians can freely leave the Ukrainian capital via the Kyiv-Vasylkiv highway" southwest of Kyiv, Russian Defense Ministry spokesman Igor Konashenkov said in a televised statement.

The spokesman confirmed Russia's "air superiority" throughout Ukraine, with the destruction of air defense systems and 5 Ukrainian combat aircraft, he said.

And the ministry announced this evening that the Russian Air Force targeted 6 convoys of Ukrainian forces, adding that it had destroyed - since the start of operations last Thursday - 311 tanks and armored vehicles, 42 aircraft and helicopters, and 51 missile launchers.

Ukraine announced that dozens of people were killed in missile strikes carried out by Russian forces on the city of Kharkiv (northeast) on Monday morning.

"Kharkiv was just hit by a barrage of Grad missiles. Dozens of people were killed and hundreds wounded," Anton Hyrashchenko, an adviser to the Ukrainian Interior Ministry, said in a Facebook post.

In the latest field developments in southern Ukraine, the Russian Defense Ministry said that its forces had taken control of the towns of Berdyansk and Enerhodar (southeast), as well as the area around the Zaporozhye nuclear power plant.

"The nuclear plant crew continues its work in maintaining and controlling the facilities," the ministry's spokesman said.

Russia also announced - on Monday - that its forces are currently working to impose a siege on the city of Mariupol on the Sea of ​​Azov from all sides.

As for the pro-Russian separatists in eastern Ukraine, who are also carrying out an offensive backed by the Russian army, a spokesman for the Russian Defense Ministry announced that they had achieved an additional 19 km advance.